The Quarantined City: sealed off from the outside world, with only the sight of the ocean to remind its inhabitants of life beyond. No one knows why the city has been quarantined and conspiracy theories abound.

But for Fellows life continues largely as before. He walks the streets, hunts out rare books; the sun continues to shine and the gulls circle above.

There’s the small matter of the ghost haunting his house, but Fellows doesn’t let himself think of that.

But when he tracks down a story by the reclusive writer known as Boursier, his old certainties fade as he becomes aware that the secrets of the city, the ghostly child, and the quarantine itself, might be more connected than he thinks…

“There is an edge of Murakami here, we are in a world just slightly skewed from our own but all the more foreign for that. Everington has a crystal clear prose style, reminiscent of JG Ballard but, like China Miéville, twisted toward the gothic…” Damien G Walter

“Good writing gives off fumes, the sort that induce dark visions, and Everington’s elegant, sophisticated prose is a potent brew. Imbibe at your own risk.” Robert Dunbar, author of The Pines and Martyrs & Monsters

“Everington is excellent at evoking a mounting sense of unease, turning to dread, that close, oppressive feeling when everything is still and ordinary, but the whole world is filled with the sense that something huge and terrible is just about to happen.” Iain Rowan, author of One Of Us and Nowhere To Go 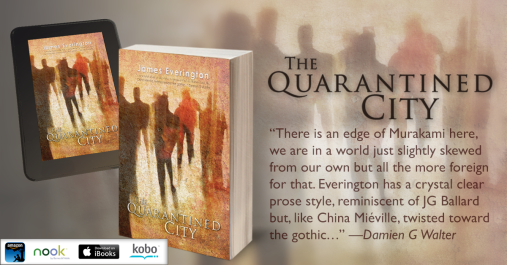